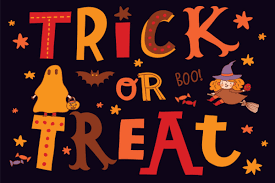 Seven Sebring Hotel celebrated Halloween with a pumpkin carving contest! Each of their departments went up against each other to win a pizza party prize. The first pumpkin shown was done by the Rooms Department was the decided winner with Sales and F&B coming in second and third.

The Courtyard Marathon Florida Keys had a spooky Halloween luncheon for the staff and had some fun with guests as they had to capture the banquet captain inmate for 1000 bonvoy points. The Courtyard Marathon team decorated their shuttle and took loads of candy to a local community Trick or Treat event. They handed out candy for several hours to the children and served Starbucks coffee to the adults….. and naturally got in the spirit of things by dressing up as well

The Holiday Inn Express Charleston-Civic Center, had a pumpkin carving contest, and the Breast Cancer Pumpkin won!  Employees also dressed up and had a contest for best costume, Holiday Inn Express One Night Stand won that!  The staff had a great time, and the pumpkins were posted on Facebook and allowed their followers to vote!

The Courtyard Madeira Beach celebrated with a pumpkin Carving contest, and allowed the guests to vote! The winner was announced on Halloween (#6 Sales). The second place prize went to The Spooky Cinema, Front Desk Team.

The Home2 in Dublin celebrated with a pumpkin carving contest and let the guests vote for the winner, Big Joe the Minion!

The Fairfield Inn Jacksonville Beach also celebrated with a pumpkin carving contest and they decorated their lobby!