Representatives from Shaner Hotels, Risk Construction, BR Kreider and other local dignitaries held an official groundbreaking ceremony, Thursday, May 30, 2019 on the site of a new hotel scheduled to open during the third quarter of 2020.  The Fairfield Inn & Suites Mechanicsburg will be the first hotel located in new Delta Point at Silver Springs in Mechanicsburg, PA.

The ceremony began with comments from Lance Shaner, CEO of Shaner Hotel Group, Bill Hoy, Shaner VP of CDFMG, DJ Risk, President of Paul Risk Construction, George Book Jr., President of the West Shore Chamber of Commerce, and Jeff Palm, Executive director of the Mechanicsburg Chamber of Commerce. Following their remarks, each lined up over a pile of dirt and officially broke ground on the project digging one scoop form the pile with their shovels (as seen above.)  Also, representatives of our sister properties in the area: Courtyard Mechanicsburg, Courtyard Hershey Chocolate Avenue, and the Fairfield Inn & Suites Harrisburg International Airport were also in attendance to lend their support to our newest addition to the Central Pennsylvania Region.

The Fairfield Inn & Suites Mechanicsburg is currently scheduled to open during the third quarter of 2020.  It will feature 108 spacious guest rooms, fitness center, and indoor swimming pool. The addition of the hotel is part of a multi-faceted development plan for the new Delta Point at Silver Springs in Mechanicsburg, PA. 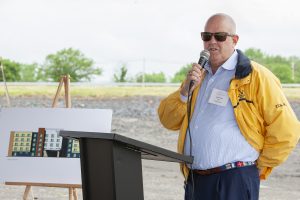 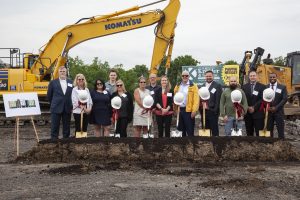