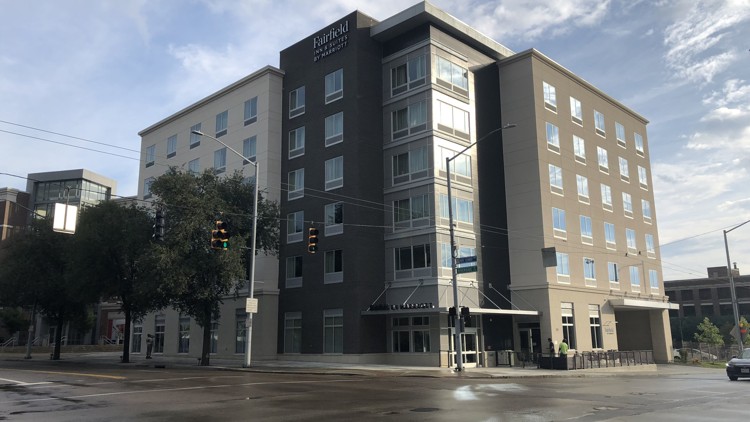 Hard work, determination, and tremendous teamwork paid off today as the new Fairfield Inn & Suites in Dayton, Ohio opened its doors to the public. One of the most successful Shaner hotel openings to date, the hotel actually opened its doors one week earlier than projected just a short time ago.

The Fairfield Inn & Suites is a 98-room property located in the newly revitalized Water Street area of downtown Dayton. The property features a modern design while still providing the traditional Fairfield amenities like a complimentary breakfast, 24-hour fitness center, business center, and free high-speed Internet. All guest rooms feature refrigerators, microwaves, and smart HDTVs with access to Netflix and Hulu. Unlike most Fairfield Inn’s, the property also features a lobby lounge which will serve light fare and spirits in the evenings.  The hotel is within walking distance to the Riverscape Metro Park where guests can kayak down the river or walk and bike along the nation’s largest network of paved recreation trails. Guests will also find themselves close to the Dayton Dragons minor league baseball, the Dayton Children’s Hospital, and the National Museum of the United States Air Force.

Congratulations to General Manager, Michael Gerrish,  Director of Sales, Aletha Dillinger, Assistant General Manager, Michele Barker, Chief Engineer, Rob Kreiner, Executive Housekeeper, Terrance Gay and the rest of the Dayton team on a successful opening. In addition, thank you to all those associates who sacrificed time away from their families and hotels to come to Dayton to help assist the team progress toward today’s successful opening.