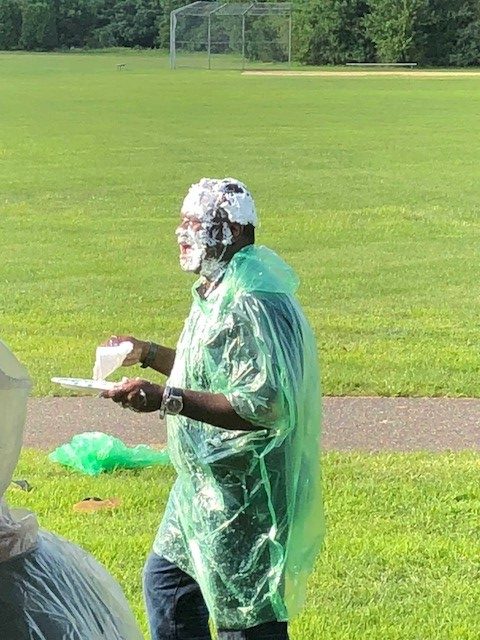 The staff at Courtyard Glassboro took the opportunity on Wednesday, August 15th to take a well needed breather and celebrate a fun afternoon with associates and their families. Everyone enjoyed a delicious menu of hot dogs, burgers, chicken, salads and various desserts. A bounce-house and face-painting provided fun for the kids, while the adults jammed to music and socialized. A round of water balloon toss quickly migrated to a water balloon “splash” as some unsuspecting managers and supervisors were thoroughly soaked to the utter glee of those who watched.

The main, much anticipated event was the pie toss. For one dollar each, associates could purchase a pie and choose the manager they wished to “pie.”  In the week leading up to this event, managers and supervisors could be heard begging and bribing to be saved from being pied, but associates remained very closed-lipped and refused to disclose their targets. Managers were allowed to wear ponchos and shower caps for protection. Jacqui was accused of cheating with her backwards facing poncho which covered her face (she said she was being smart.) Anthony was very confident that he would be the only one left unscathed, while Terri and Olivia were certain that Housekeeping and the Bistro would save them. Bruce was unsure if the Front Office was setting him up and Doug was convinced that he would be rewarded for being the grill-master. After the first couple of pies, it became obvious that everyone was fair game as Anthony’s head was completely covered with whipped cream.

In the end, they learned that managers were pied for the sheer delight of their responses and for stress relief. A total of $225.00 including proceeds from the pie sale was donated to the Boys and Girl Club of Glassboro.