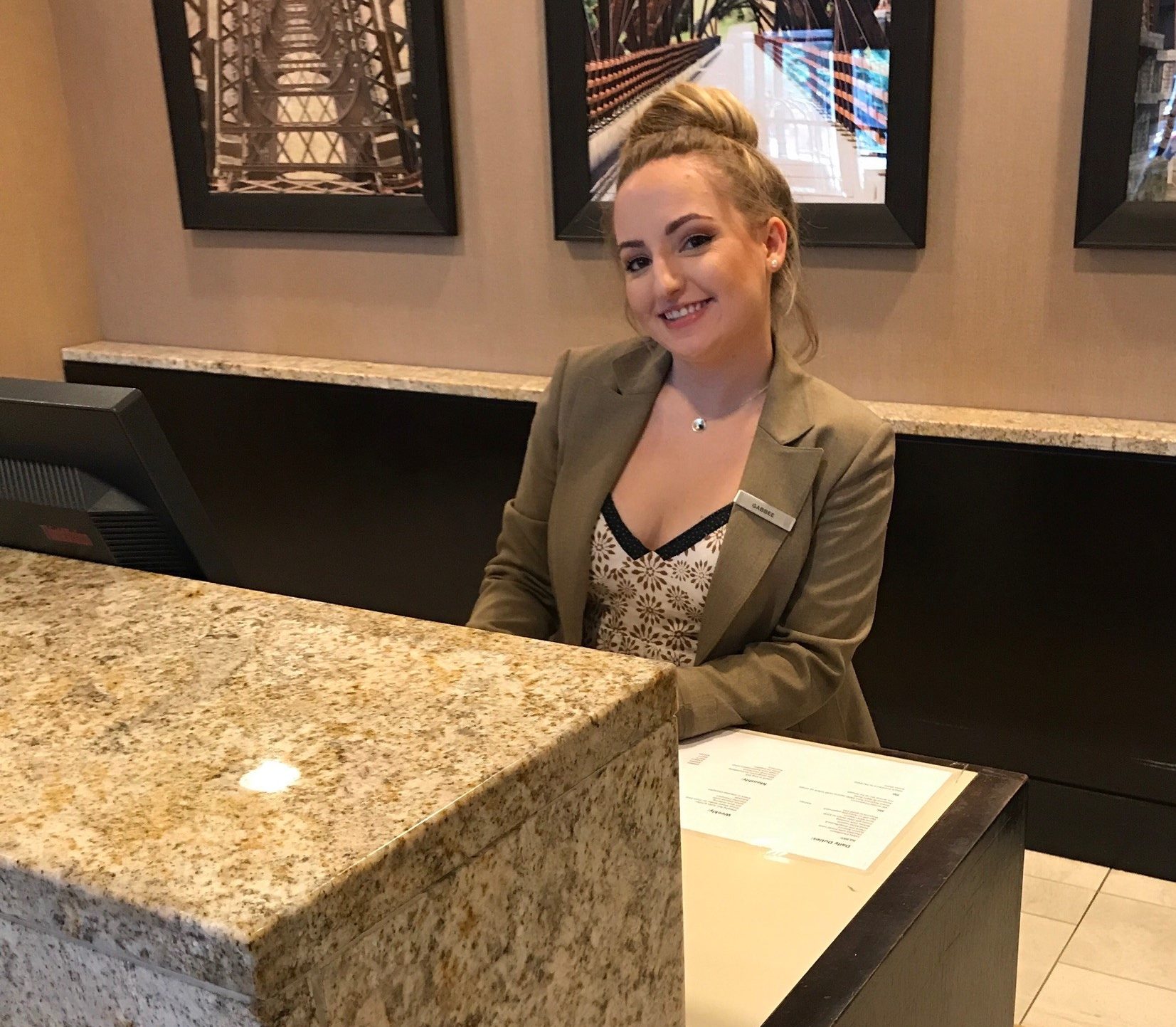 “Seeing people happy makes everything I do worth it,” was Gabrielle Gorman’s response when asked what motivated her to provide outstanding customer service.  It’s an attitude every front desk agent really should have. The front desk agents are the initial face of the hotel. They are the first to greet and interact with the guest on property.  The check-in experience can determine whether or not a guest is going to have a positive or negative attitude toward the hotel throughout the duration of their stay. According to Gabrielle, known to the rest of her co-workers as Gabee, a front desk agent should be “ambitious, friendly, enthusiastic, resourceful and ready to serve others.”  These are all attributes that Gabee brings to the Marriott Chattanooga every day.

It was a little more than a year ago that Gabee attended a job fair at the Marriott Chattanooga and decided that it seemed like a good place to work.  It was going to be something new for Gabee as she mostly worked in retail and as a server before.  She was hired as a front desk agent and immediately made an impact on the property.  She has been recognized on several occasions as the “Check-In Queen” of the hotel, a title earned by front desk agents by the number of guests they check-in and their guest satisfaction scores.  Gabee continuously receives outstanding comments from the guests that interact with her.  One co-worker even referred to Gabee as “such a bright light in our lobby.”  This extraordinary customer service led to Gabee being named the Chattanooga Hospitality Association 2017 Hotel Employee of the Year in April.

Outside of work, Gabee works with Scoliosis Awareness in Chattanooga and participates in an annual walk that raises funds for research.  She also likes to shop, play with make-up, hang out with her dogs and spend time with her family.  Part of that family is her mother who is a Registered Nurse and provided an example for Gabee of the importance of helping others and being prepared for anything.  In middle school Gabee even took CPR classes and learned a skill that would prove to be very important to the life of a guest at the Marriott Chattanooga.

In March 2017, Gabee was alerted by a guest that another guest was outside, not breathing and turning blue in the face. “I was a little panicked,” said Gabee, “but I knew I had to stay calm in order to help him and get him help.”  Gabee assessed the situation and quickly went into action.  She grabbed an oxygen tank and the defibrillator and started to perform CPR.  After receiving no response, she decided that she would need to use the defibrillator. Gabee had never used one before but was able to effectively follow the directions and use it on the guest.  Administering the defibrillator worked and ultimately saved the man’s life. They later learned that he had suffered from a heart attack and had to have open heart surgery to implant a pacemaker.  Gabee’s quick response and calm demeanor saved the guest’s life.  About the praise she has received Gabee responded “I get emotional when I think about it. I am just grateful that he is alive and well.”

In a letter from the guest’s family, his wife said “It is truly a miracle that he is alive. God was watching out for him that day.”  Gabee showed impeccable poise when standing in the face of tragedy.  She will never forget those moments just as the guest and his family will never forget her.  Gabee’s actions truly changed the lives of that guest and his family forever.