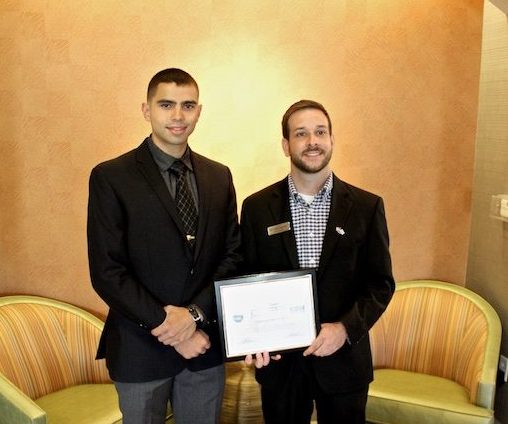 The Pennsylvania Employer Support of the Guard and Reserve (ESGR), a Department of Defense (DoD) office, announced last month that Matt Pagano, General Manager of the SpringHill Suites State College, was honored with a Patriot Award.  Matt was given this award in recognition of his extraordinary support of SpringHill Suites associate, Corporal David Mitchell, a member of MP Company B, 4th Battalion.

The Patriot Award recognizes employers who show incredible support to their associates serving in the Pennsylvania Guard and Reserve.  William Burkhard, PA ESGR North Central Area Chair, said “the Patriot Award was created by ESGR to publicly recognize individuals who provide outstanding patriotic support and cooperation to their employees, who like the citizen warriors before them, have answered their nation’s call to serve.”

According to their press release “ESGR, a Department of Defense office, seeks to foster a culture in which all employers support and value the employment and military service of members of the National Guard and Reserve in the United States. ESGR facilitates and promotes a cooperative culture of employer support for National Guard and Reserve service by developing and advocating mutually beneficial initiatives, recognizing outstanding employer support, increasing awareness of applicable laws and policies, resolving potential conflicts between employers and their service members, and acting as the employers’ principal advocate within DoD. Paramount to ESGR’s mission is encouraging employment of Guardsmen and Reservists who bring integrity, global perspective and proven leadership to the civilian workforce.

Congratulations to Matt on receiving this honor and thank you David for your continued service.