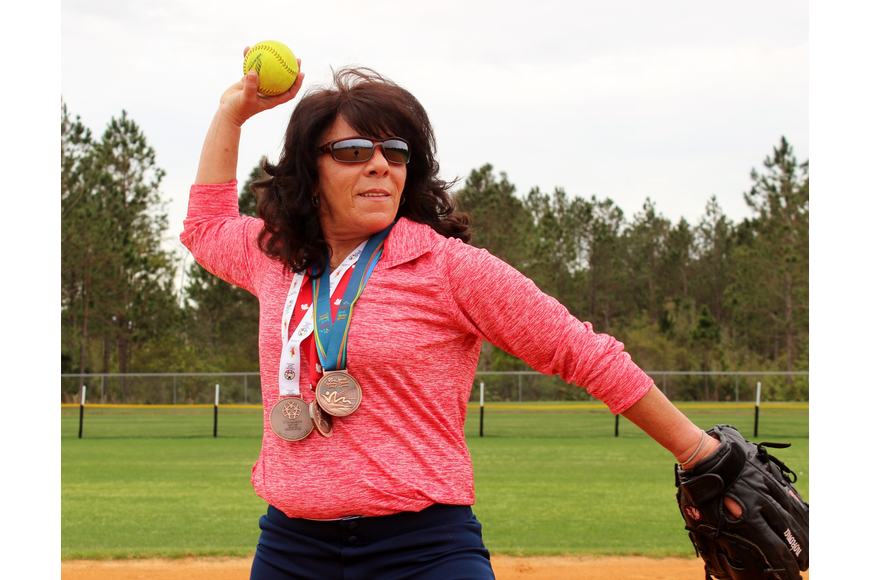 If you are ever at the Courtyard St Augustine for a visit, there is a good chance that you are going to meet Doreen Chase, Sales Manager for both the Courtyard and Fairfield Inn St. Augustine.  When you meet Doreen, you will quickly find her to be very professional and dedicated to the success of the Courtyard.  She’s been working with Shaner for just a month but is quickly adapting to her role. She has been out on sales calls and mastering all facets of sales as her position will overall generate revenue for both hotels.  What you won’t realize though when you meet Doreen is that you are standing in the presence of a three-time World Masters Games bronze medalist for the U.S. in fast pitch softball.

Very similar to the Olympics, the World Master Games is an international multi-sport event that takes place every four years.  It is governed by the International Masters Games Association.  The event is open to athletes of all abilities and most ages with the minimum being between 25 and 35 depending on the sport.  Many past Olympians compete in the World Masters Games.  This year’s event will be held in Auckland, New Zealand from April 21 – 30.

Doreen began playing softball when she was six years old and fell in love with the game.  She hasn’t stopped playing since.  From Little League to High School, College and the local community leagues, Doreen continued to develop her skills over time which eventually led to her landing a spot on the  World Masters Games team in 2005.  Doreen plays shortstop for the U.S. team which actually consists of players from both the U.S. and Canada.  The first games she participated in were held in Canada. In a Palm Coast Observer news article, Doreen explained that she experienced “butterflies” for the first time in a long time.  Doreen’s team took third place at those games.  She then traveled to Australia in 2009 and Italy in 2013 where her teams won two more bronze medals.

After 12 years as a member of the World Masters Games team, Doreen knows that her career is nearing its end.  Although she will be the first to tell you that age is just a number and plans to compete as long as she is physically able.  While Doreen and her team are excited just to compete in the games and would be happy with another bronze or even silver medal, gold is the goal for this year.  Even though she hasn’t ruled out making a fifth run at the games in 2021, Doreen knows this could be her last chance to bring home a gold medal.  Doreen and the team will enter the games next week focused on achieving that goal.

Good Luck to Doreen and the World Masters Games Team.